Tacombi Gets in the Spirits

Serve tacos out of a vintage VW van and they will come. Tacombi at Fonda Nolita, a massive garage turned lively taqueria, has proven that to be true. And, as of this fall, you can chase that set of barbacao tacos with one of three signature mezcals 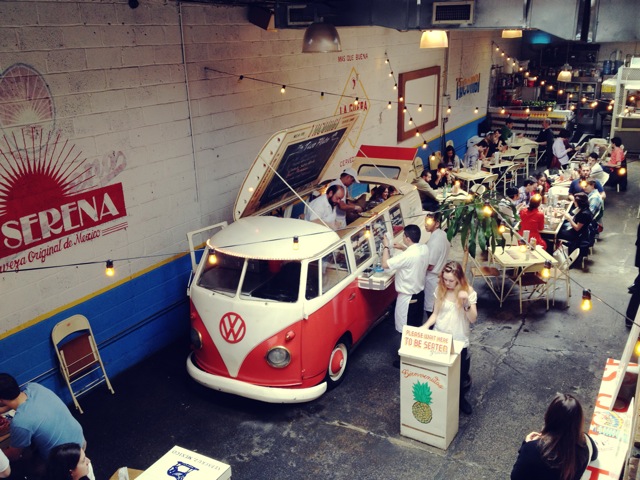 Serve tacos out of a vintage VW van and they will come. Tacombi at Fonda Nolita, a massive garage turned lively taqueria, has proven that to be true. And, as of this fall, you can chase that set of barbacao tacos with one of three signature mezcals (our favorite was the moderately aged Reposado with a golden color and warm, woodsy flavor). Though in some parts of Mexico tradition dictates that you spill a bit of mezcal before swilling as an offering to Mayahuel, the Aztec goddess of maguey, these will prove hard to part with. Here, Tacombi co-owner/founder Dario Wolos, talks mezcal.

WHAT WAS YOUR FIRST INTRODUCTION TO MEZCAL?

The first time we tasted mezcal we were pretty young and on a trip around the state of Oaxaca where it’s very much a part of the local culture… probably more so than tequila. When we started Tacombi back in Playa del Carmen in 2006, there was already a local trend building in Mexican cities where young consumers were switching to mezcal from tequila for a lot of reasons; namely, its artisanal qualities. The one that struck us at the time was that it was seemingly a cleaner spirit  —more fun and easier to wake up to the next day.

PEOPLE OFTEN MENTION IT IN THE SAME BREATH AS TEQUILA; FOR THE UNINITIATED, WHAT ARE THE BASIC DIFFERENCES BETWEEN THE TWO?

Tequila is effectively one type of mezcal, the most widely commercialized, made from only the Agave Tequilana Weber (Blue Agave) and, like champagne, it can only be made in regions that the Mexican government has authorized as tequila-producing regions, “Denominacion de Origen ” under strict guidelines. Mezcal, on the other hand, comes from a network more similar to single estate wineries where often every batch is quite different and many different varieties of  the agave plant are used. The batches vary depending on a number of factors. The biggest difference that affects the taste is the way the “piña” is handled—for  tequila it is steamed and for mezcal it is roasted in an underground pit. A lot of people believe that mezcal connects you more to the elements it comes from because of the artisanal way in which it is produced, whereas tequila now  often tends to be mass produced and flavors balanced to achieve the consistency each brand aspires to.

THE PROCESS OF MAKING MEZCAL IS PRETTY INCREDIBLE…

Mezcal is one of Mexico’s amazing traditions and there are all kinds of stories from the makers about what affects their unique batches—from the animals that pollinate the agave through to its distillation and storage. Makers vary the steps of cutting out the piñas from the agave, roasting them, crushing and fermenting the mash, distillation and storage to produce their own recipe. Having been on different ranches that make their own small batches, the result, when properly appreciated, connects you to the land in a way that is hard to describe.

TELL ME ABOUT THE NEW MEZCALS ON OFFER AT TACOMBI.

The Mezcals offered at Tacombi are made at El Tinieblo Ranch in the northern state of Tamaulipas, between the coast of the Gulf of Mexico and the Sierra Madre Oriental where this family has managed to capture the salty air, rolling hills and wild game in each batch they produce. We serve a Joven (ready to be  consumed after it’s made), a Reposado (normally aged 6 months), and an Añejo (aged more than a year).

AND, MOST IMPORTANTLY, THE BEST WAY TO DRINK IT?

Mezcal is best when shared—sipped and chased with a beer or mineral water and orange slices.