The sixth edition of Gather is all about Magic. Inside, you will find food that instantly astonishes and dishes with a power that is more innate; a chapter dedicated to wild edible botanicals and another that takes its cues from the the most magical story genre: the fairy tale. Plus, we ponder the intersection of science and magic in the kitchen and explore the age-old practice of potion-making.

Welcome to our cabinet of curiosities. First known as wunderkammern in 16th century Europe, these treasure troves packed with a cache of bewitching objects and macabre oddities are where science and the supernatural meet. Where jarred specimens and amber potion vials vie for shelf space with craggy minerals and maps of far-flung lands. Our meal instigators, each one a marvel, are at home here. A duo of cocktails with magic and mystery at their heart; a legendary aphrodisiac with exotic underpinnings; savory bites that assume the shape of a mythical creature; an aperitif that doubles as an amulet; and a gurgling crock of garlic-doused goat cheese. Curiouser and curiouser... Cheese you will warm up to. Conjures a sense of wonder with every sip. (pictured left) Snacks you can believe in.

The new objects of your desire. It takes two to make a thing go right.

True artists see magic in the everyday. Like Lev Grossman, whose Magician trilogy draws readers into the labyrinthine land of Fillory, which his character Quentin enters via a Brooklyn garden. Or painter Sigmar Polke, whose enigmatic works shift the perception of quotidian things (a potato, a mushroom, a teapot). In this, the meal’s second act, we celebrate the magic in the familiar. A beet salad with capers roots the vegetable in its romantic folklore; a matzo ball soup is capable of curing whatever ails you; a mound of mussels is imbued with voodoo spirit; and spectral spears of white asparagus cross paths with peas and walnuts in a plated tribute to a favorite street-corner trick. Do do that voodoo that you do so well. A resounding thumbs up. It will be an affair to remember. A different kind of over-the-counter medicine.

Ladies and gentlemen, for the meal’s main attractions we hearkened back to magic’s simpler days, a time before grandiose coups of illusion, when top hatted magicians were summoned to the stage with drum rolls. Like Sesame Street’s The Amazing Mumford, who would, with a wave of his wand and the utterance of his magic words (“à la peanut butter sandwich!”), make Grover levitate. For our own magnificent and mystifying feats we put rabbit in a different kind of hat; we sent a vegetable tagine on a wild carpet ride; we got braciole in a bind worthy of Houdini; we turned a piece of cod shimmering gold; and we gave risotto an illusory-inspired spin. Presto!

What we found on our magic carpet ride. Nothing gold can stay… on your plate for long. Tune in and turn on.

A magician is at the center of attention yet simultaneously at a remove, and when the stage is a table, similar rules apply. For our meal’s grand finale, dishes are brandished with a crowd-pleasing flourish, but each one conceals its own magic within. A glimmering crystal ball is rendered in white cranberry and elderflower jello; caramel-soaked bananas become spectacle when they are set aflame with theatrical grandeur; cookies look to the dreamy night sky for inspiration; a chocolate roll is sawed in half to reveal oozing swirls of whipped cream and sliced malt balls; and a ricotta cheesecake is a study in the simplest of kitchen-born transformations. Be ready for them to do a disappearing act. One bite and it will do a vanishing act. A type of fire-eating we can all swallow. Metamorphosis has never tasted this good. Now here we go again, we see the crystal visions. They will have you over the moon.

Commonly known as fairy or folk tales, the German language best captures their essence in word form: wundermarchen, translation, “wonder tale.” Because that is what they truly are: stories that, because of their innate magic, elicit a sense of wonder. Wonder we did—for Jack and the Beanstalk we dreamt up a golden egg curry; for Rumpelstiltskin, a lemony pasta with the look of spun gold; a thick braided cinnamon bread for Rapunzel; sparkling baked apples for Snow White; for Cinderella, a lentil soup with pumpkin; and for Pinocchio, he of the growing nose, an aromatic cheese sandwich. These tales’ other common thread is a happy ending, which leaves you feeling much like a wonderful meal: content. The treasure at the end of any beanstalk. Mirror, mirror, what’s the fairest apple dessert of all? Nature might be the greatest magician of all, its vast array of herbs the proverbial tricks up its sleeve. In the simplest terms and most convenient definitions an herb is a useful plant, but really herbs are a phenomenon, each culture and century further contributing to their magical legacy. Here, we lift them to their rightful exalted status, excerpting a glossary of herbs from a new book, taking tally of herb-forward digestifs, and then letting herbs take the lead in a crop of recipes. Thyme and mint star in a duo of cocktails; lovage with a silken panna cotta; caraway alongside Brussels sprouts; and Thai basil is woven into scallion pancakes. As Mary said in The Secret Garden, “if you look the right way, you can see that the whole world is a garden.” 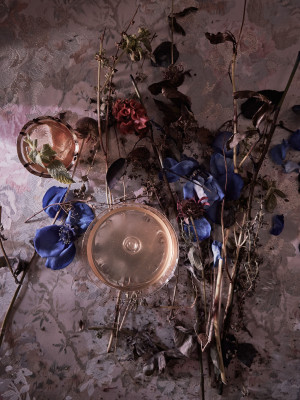 A cocktail with magic healing powers that’s been “dragged through the garden.” (pictured left) Like Manwich, it will put a spell on you. The best way to fall flat.

Baer is an artist who draws on her upbringing in the high mountain desert of Santa Fe. Her latest project is a series of watercolor paintings of planets and moons. Baer now lives in Connecticut with a sheepdog named Fox and a bearded man named Seth. See her work at stellamariabaer.com and follow @stellamariabaer.

The Michigan-based collage artist’s surrealist-style creations have been exhibited around the globe and featured in publications including Lola and Prototype. Case is also working on dual degrees in fine art and psychology.

Photographer Cornett wanders the woods in the Catskills, where he lives with his beautiful wife, lovely new daughter, and two standard poodles. He is currently shooting this and that for the people. Glimpse his life’s goings-on at thelivest1.com.

Partners in photography and life, Andrea Gentl and Martin Hyers met while students at Parsons. Focused on food, travel, interiors, and portraits, their clients include Condé Nast Traveler, Bergdorf Goodman, and Grey Goose, and they’ve picked up a slew of SPD awards. Hyers, a fine- art photographer, recently published Empire with William Mebane. His work can be seen at hyersandmebane.com. Gentl also shoots and writes hungryghostfoodandtravel. com. See the couple’s work at gentlandhyers.com.

Photographer Johnson has worked as an art director at Martha Stewart Living and MAC cosmetics, and shot for The Wall Street Journal, Food & Wine, and Martha Stewart Weddings. See his work at stephenkentjohnson.com.

With degrees in writing, the culinary arts, and a Masters in education, King is adept at expressing herself in the kitchen and on the page. A contributor to Honest Cooking and Remedy Quarterly, she teamed up with chef Amanda Freitag on her upcoming book.

Monaghan is a native of New York City. He currently lives in Brooklyn with his wife Theo and two Cornish Rex cats, Joan and Lois. The focus of his work are portraits, still-lifes, and landscapes. See his work at keirnanmonaghan.com.

Born in Malmö, Sweden, Nilsson moved to New York to cook. After working as a chef, he decided to pursue a degree in photography. Since 2006, when Nilsson began making food his subject, his client list has grown to include Bon Appétit, Departures, New York, Condé Nast Traveler, Swallow, and The New York Times Magazine. When he’s not shooting, the avid wine collector enjoys throwing dinner parties in his Bushwick digs. See his work at marcusnilsson.com.

The San Francisco-based graphic designer and artist has worked for General Assembly and Airbnb, among others, and is currently in the early stages of a new start-up. The “visual situationist” uses her art (like her Stuffed Hipster Emblems) to reveal patterns in things oft-overlooked and banal. Her work has appeared in Fast Company and White Zinfandel. See her work at mimiochun.com.

Orr, currently the executive editor at Condé Nast Traveler, has contributed to The New York Times and Wall Street Journal, and held positions at Martha Stewart Living, House & Garden, and Domino. The gardening expert, who splits his time between New York and the Catskills, has authored three books, including his latest, The New American Herbal (Clarkson Potter).

Gather’s food stylist and co-recipe editor entered the gastronomical world after selling her East Village bar and using the proceeds to attend culinary school. She logged time in some of the city’s most esteemed restaurant kitchens before shifting her focus to food styling and recipe development. See her work at maggieruggiero.com.

Author of the memoir Drinking with Men, drink columnist for The New York Times Magazine, and a contributor to This American Life, Schaap has also writtern for Bon Appétit, Lucky Peach, Marie Claire, Saveur, and Slate, among others. A working bartender, she has logged time as a fortuneteller, a librarian at a paranormal society, a community organizer, and a preacher. Schaap is currently writing
a book about whiskey. See her work at rosieschaap.com.

Gather’s co-recipe editor, Shuster started off her career in publishing at Harper Collins before changing courses to attend the Institute of Culinary Education. Since earning her degree, she has worked as a freelance food stylist and recipe developer, dividing her time between New York and Boston. See her work at mollyshuster.com.

The New York-based artist is a graduate of RISD and the Skowhegan School of Painting & Sculpture, and will soon earn an MFA at Columbia. Stern has exhibited in New York and Boston at Humble Arts, Invisible Exports and Carroll and Sons, among others, and been featured in publications like MATTE, BLINK, and Outpost Journal.

An Australian ex-pat, the New York-based image maker created avant-garde clothes before deciding to document them instead, working as a fashion photographer in Paris, then moving to London and into the world of interiors. Author of Interiors and Working Space: An Insight into the Creative Heart, he recently launched Cezanne’s Shadow, a line of wallpapers and textiles created from his photo series “Falling in Love at the Institute.” See his work (and sign up for his newsletter) at martynthompsonstudio.com.

An assistant professor of psychology at Claremont McKenna, co-author of the book Out of Character, and contributor to Scientific American, Valdesolo’s research focuses on moral behaviors. He claims no experience in the worlds of food and style. See his work at valdesolo.com.

Canada-born, Brooklyn- based Vamvounakis studied photography at the Rochester Institute of Technology before embarking on a career as a prop stylist. Her clients include American Express, Anthropologie, West Elm, Estée Lauder, and Bon Appétit.

The New York-based writer and editor is the author of The People in the Trees (Anchor) and the forthcoming A Little Life (Doubleday) out in March 2015. Follow her @hanyayanagihara. The widespread success of 2002’s Turn on the Bright Lights nudged Interpol into the position of helping to define the New York sound of the early aughts. A number of albums and band shifts later, the group’s latest, El Pintor, was released in September. Along the way, guitarist Daniel Kessler developed a side passion for food and is now […] Only two albums in (2010’s critical darling debut, The Fool, and this year’s utterly enchanting eponymous follow-up), this all-female, California-born band has already amassed a fervent following. Warpaint’s singular sound—at once dark and illusory and seriously beautiful—is best illustrated in their live performances where it has ample room to wander and drift.